for your 3D Design Software Sales and Training ​

A selection of both charming and common temperate deciduous trees mainly from Northeastern America, temperate Europe and East Asia planted in parks, gardens, or streets including showy specimen trees such as the Japanese angelica tree, the showy crab apple, ‘Merrill’ magnolia, and white willow, as well as some very common street trees such as the columnar Norway maple and Turkish hazel.”

The following 10 tree species are included in the Plants Kit 13. Each species comes in 36 variations per species, i.e. 3 variants, 3 ages and 4 seasonal aspects, for a total of 360 models per Kit.

Small deciduous tree with a dense, round-to-umbel-shaped, half-open crown. Gray-brown trunk, with smooth bark peeling in thin plates from the mature trunk. Slender, ovate, serrate, dark-green leaves. Crimson buds open to profuse pale pink flowers, which mature to white. Profuse masses of small, yellowish fruits with a red blush, which are quite attractive to birds. Vigorous tree with one of the best mid-spring flowering displays of any of the crabapples. Used in large gardens, parks, and public gardens.

Medium-sized, fast-growing deciduous tree with an irregular, transparent, half-open, oval-to-rounded crown. Grayish, rough, deeply furrowed bark. Young twigs are olive-green to brown. Dark bluish-green leaves made of oval leaflets, turning yellow in autumn. Dense, drooping clusters of aromatic white flowers, borne in late spring and summer. Linear to oblong pods mature in autumn. The tree is a major honey plant in the Eastern US, and has also been planted in European countries. Often planted along streets and in parks.

Medium-sized, fast-growing deciduous tree with an irregular, half-open, oval-to-ovoid crown. Yellowish grey-brown bark, deeply fissured in older trees. Young twigs are yellowish-brown and very pliable. Long, narrow, pointed leaves, dull green above and blue-green underneath, with a silky texture that causes them to appear silvery-white at a distance. Fall color is usually a pale yellow, but sometimes appears as a more saturated yellow. Catkins appear with the leaves in spring.

All Laubwerk Plants in this Kit come in 36 variations per species, i.e. 3 variants, 3 ages and 4 seasons. Here are a few examples of the variety: 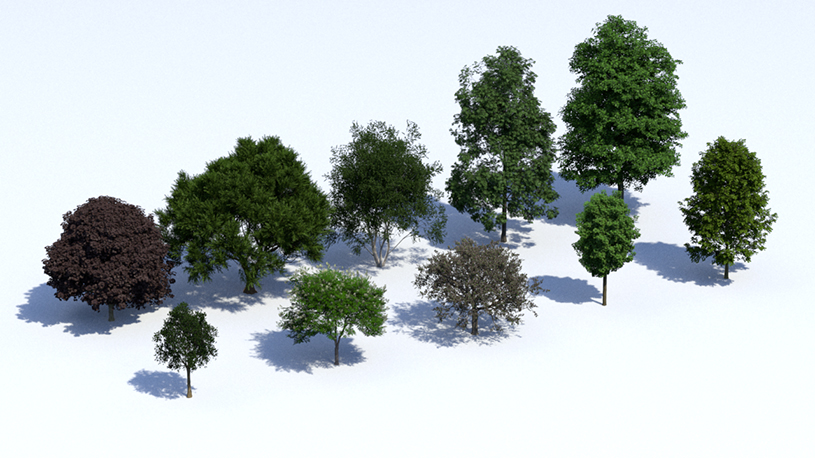 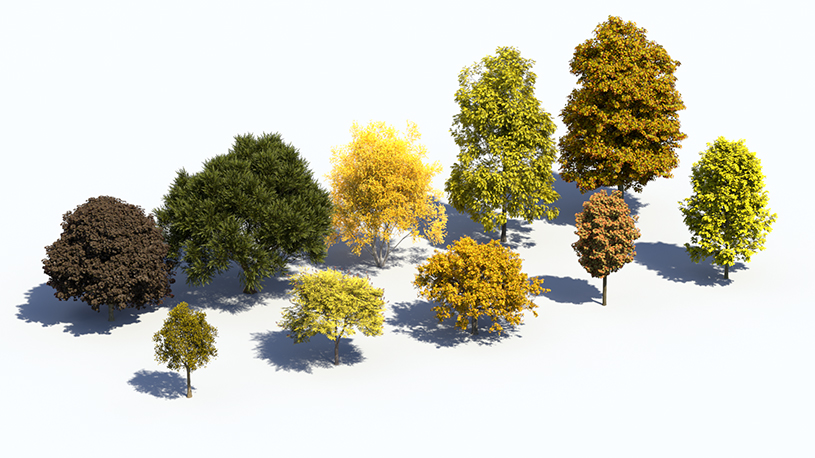 The Laubwerk Player is a plugin for Autodesk 3ds Max & Maya, MAXON Cinema 4D, Trimble SketchUp, and SideFX Houdini, that comes bundled with every Laubwerk Plants Kit. It loads the models and allows for easy selection and manipulation of the models, e.g.  choose between variations, ages and seasons and allows fine grained control about Level of Detail. See the Laubwerk Player page for a more detailed description.

Laubwerk Customer Support includes technical support by email and free periodic updates for bug fixes and improvements of the Laubwerk Plant models. Your purchases are delivered as direct downloads.

Laubwerk products are constantly being updated with the latest technology. Keep your Plants Kit up-to-date! To update your Laubwerk Plants Kit 10, log in to your Account Page and download the latest update.

For a free product trial get the Laubwerk Plants Kit Freebie.

Our aim is to make the installation process as easy as possible for you. If you like to get more information, we have compiled these Laubwerk Plants Kits installation instructions, including advanced topics such as considerations when working in a network.